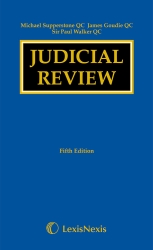 Commentary
This title provides an authoritative and comprehensive text on the entire law of judicial review. Fully updated, the sixth edition provides a thorough, detailed analysis of this complex area of law from a team of judicial review experts. It contains an essential account of relevant cases plus examples of the application of the general principles, covering the law of judicial review in a number of areas, including local government, town and country planning, immigration and housing and social security. In addition, the sixth edition:

The Supplement content is integrated into the online title commentary and covers:

How often is the source updated?
Ad hoc

How quickly is the source updated?
Within 2 weeks of publication