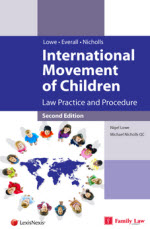 Facing a children's case with an international element can be daunting. There is so much to think about: how are the proceedings going to be served abroad; will there be a dispute about which court has power to deal with; what law will be applied; will the final order be recognised and enforced in another country? These and other issues concerned with cross-border disputes concerning children are comprehensively discussed in this, the second edition of a much respected work.

The book deals with both lawful and unlawful movement of children including coverage of criminal law. Drawing on information and case-law from across the globe, it provides extensive discussion of the revised Brussels II Regulation, the 1980 Hague Abduction Convention and the 1996 Hague Protection of Children Convention and of the inter relationship between these instruments. In the UK context it discusses the application of the inherent jurisdiction. Two new chapters deal with international aspects of adoption and with international aspects of surrogacy. Also included are chapters on international relocation, international access, tracing a child, preventing abduction and on the role of children in abduction proceedings.

This new edition will be invaluable for family law practitioners, the judiciary, legal academics, the police, local authorities, non-Government agencies and government officers working in this area.

How quickly is the source updated?
within 2 weeks of publication