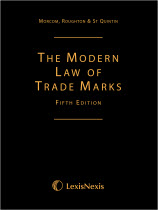 The Modern Law of Trade Marks is a comprehensive guide on trade mark law enabling practitioners to provide clients with effective advice with the best possible support and authority. It includes detailed analysis of important UK and European legislation and decisions, in-depth commentary on the complexities of the Trade Marks Act 1994 and the Madrid Protocol and the CTM Regulation.

All aspects of registered trade marks are included, together with information on applications, registration, protections and infringement. Divided into seven parts, key topics covered are: Background to the Law; Registered Marks; Passing Off; Civil Proceedings; Customs and Criminal Offences; International Treaties; and the Community Trade Mark.

Major changes covered by the new fifth edition include:

How often is the source updated?
Current edition