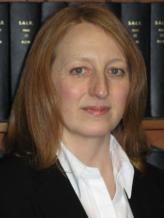 Member of the Insolvency Solicitors' Committee of the Law Society of Scotland (1995 to 2008), Member of Expert Group advising European Commission on c